Department of Classics and Classical Reception

The department continues the long tradition of research of ancient culture and thought, building on the groundwork laid already in the former Centre for Greek, Roman and Latin Studies of the Czechoslovak Academy of Sciences. It is engaged in the study of ancient culture and its reception in later periods, especially in those cultural spheres which are defined against the background of the classical heritage and lively communicate with the classical culture, i. e. mainly drama and theatre, literature and visual arts. The classical culture is not a secluded subject of research; the classical antiquity is also studied as an idea which was imbued with various meanings with regard to contemporaneous needs and which served to express important contemporary topics. The works of our department concentrate on how the classical antiquity was seen in later centuries, and on works of art which dealt with the antiquity or were inspired by it. Much attention is also paid to the reception of classical culture in the Czech Lands, shaped by specific cultural, social and historical factors of the multicultural region in the centre of Europe.

RECEPTION OF ANTIQUITY IN THE CZECH LANDS

Czech culture has been acquainted, either directly or through intermediators, with the legacy of antiquity since the Middle Ages. One of the long-term projects of the department is the analysis and interpreation of the ways in which the culture of antiquity was treated by Czech art in various contexts, especially in theatre, literature and visual arts, with regard to specific art epoch, political circumstances or different social groups. To this topic, several collective monographs have been dedicated by the department members in past years, and also studies published both abroad and at home (for the list of selected publications see below). Within the framework of this long-term project, the electronic databases Antiquity and Czech Culture are maintained as well.

In order to create a high-quality translation, it is imperative not only to master the target language and the one of the source, but especially to have a deep insight into the translated author, his cultural and historical background, and knowledge of translation studies. Without meeting these requirements, the translation produced is of poor quality, it does not interpret the meaning of the original but distorts and blurs it. Translations of dramas are even more demanding, because they not only have to meet the demands on literary qualities of the text, but also to have the potential to be rendered on stage. We believe translations of classical works to be one of the key activities which must be systematically fostered, because the reception of the classical antiquity in Czech culture is today, given the minimal knowledge of ancient Greek and Latin, possible only through translations of the originals. Given the personnel composition of the department, we will first focus on ancient drama and its contemporary reflexions. The translation itself is a specific kind of reception of ancient literature, as we make clear by theoretical insight into this discipline. The first output of the project will be three volumes of new Czech translation of L. A. Seneca’s tragedies, because Czech translations either do not exist at all or have been published only in journals. The three volumes, initiated by Professor Eva Stehlíková, will be published in the publishing house Větrné mlýny (so-far two volumes have been published in 2017 and 2018).

The database of performances of ancient dramas on the Czech stage is a part of the European projects Network of Research and Documentation of Performances of Ancient Greek Drama (Athens) and Archive of Performances of Greek and Roman Drama (Oxford). Furthermore, Jan Bažant takes part in the project Corpus vasorum antiquorum that is under the aegis of the Union académique internationale in Brussels.

The project deals with depictions of ancient Greek and Roman myths in visual arts since the beginnings in the 8th century BCE until today. The first output of the project is the monograph Perseus a Medusa (Perseus and Medusa) published in the publishing house Academia in 2017 (see Strategy AV21 under Projects).

The project presents the work of Karel Dostal, Czech theatre director who worked for most years at the National Theatre. His style is surveyed, as well as his approaches, esp. to classical and classicist repertoire. His significant productions are analysed in the context of the Czech theatre canon. The research is going to be published in a monograph and in a peer-reviewed academic journal. Karel Dostal went through all the historical epochs of Czechoslovakia until the 1960s. He never conformed to the demands of authoritative regimes, remained ethically fírm, and was therefore forgotten by history, although in his time he was perceived as a progressive artist, often entrusted with challenging tasks profiling the theatres. Thanks to his German training, his work stemmed from traditions unusual in Czech theatre: he contributed to the promotion both of modern drama and of classicism on Czech stages. The survey of his work can thus significantly extend the ways of understanding the development of Czech theatre culture. It will likely prove Dostal's influence not only on the development of directing but also on Czech acting. An issue of general importance is the study of his work in the context of the transformation of Czech theatre network - the research can enrich our awarness about the mechanisms guiding the Czech theatre between the birth of the republic and the 1960s, which will once again transform Czech theatre and demands of the audience.

The Antiquity in Inscriptions of Czech Provenance

THE DEPARTMENT OF THEATRE STUDIES AT THE FACULTY OF ARTS OF THE CHARLES UNIVERSITY, PRAGUE
Every semester, the Department organises at least three specialised courses based on our scholars’ own projects, mostly dealing with the oldest era of the history of theatre in a broad historical, cultural and social context. We also present the classical culture in general and its reception in later centuries. All members of the department take part on the educational activities to some extent. For more details (in Czech), click here. 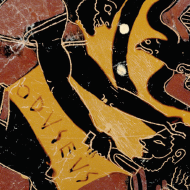