The department’s main task is the creation of the Dictionary of Medieval Latin in Czech Lands which registers and explains Medieval Latin vocabulary used in Czech lands since the beginnings of Latin literature in this area to 1500 CE. The Dictionary is published per fascicules and serves both Czech and foreign scholars in all branches of Medieval Studies (the entries are explained in Latin and in Czech). Apart from the printed version, it is also possible to use the electronic version and scans of a part of the card files which serve as the material for the Dictionary’s creation. The work on the Dictionary is a basis for other research outputs of the department: lexicographic studies, translations and editions.

HISTORY OF THE DICTIONARY
The work on the Dictionary began in 1934, when a Commission for the Dictionary of Medieval Latin, led by Prof. Bohumil Ryba, was established within the Czech Academy of Sciences and Arts. Since that year till the 1970s (with a slow-down during the War), excerption of sources was taking place. In 1977, first fascicule appeared, containing editorial principles and lists of sources and abbreviations. The first two volumes of the Dictionary, encompassing letters A–C and D–H, were published by the publishing house Academia. Since 1995, the Dictionary is published by KLP – Koniasch Latin Press. Since the 1930s, the Dictionary is a part of an international researched project coordinated by the Union Académique International in Brussels.

LATINITATIS MEDII AEVI LEXICON BOHEMORUM – THE DICTIONARY OF MEDIEVAL LATIN IN CZECH LANDS
The Dictionary registers and explains the vocabulary of Medieval Latin as used in Czech lands since the beginnings of Latin letters in this area (from about 1000 CE) to 1500 CE. The material, today amounting to ca. 800 000 excerpt sheets, was assembled from sources of various types (diplomatical, official, belles-lettres, scientific literature etc.) of Czech provenance. It provides thorough and sufficiently informative data about the wide range and heterogeneity of means of expression to be found in Latin letters of the Czech Middle Ages. Its card file index is the richest corpus of Medieval Latin in the Czech Republic. The merit of our Dictionary, as compared to those created in foreign countries, is that it includes not only edited texts, but also numerous manuscripts and old prints from Czech and foreign libraries. Thus, it makes accessible a great wealth of words that would otherwise remain hidden in unpublished sources. Especially valuable for better understanding of the medieval mentality are quotations from medieval treatises, public acts and numerous Czech and German vocabularies.

The Dictionary differentiates its content from and complements the eighth edition of Georges’ Latin‑German Lexicon (K. E. Georges - H. Georges, Ausführliches lateinisch-deutsches Handwörterbuch I, II, Basel 19138). This method, stipulated by rules of Du Cange Committee for creating dictionaries of Medieval Latin, allows the capture of all phonological, morphological, syntactical, stylistic, prosodic and semantic divergences of Medieval Latin vocabulary inherited from the ancient era as compared with classical norms; the study of its changes and developments in new social and cultural conditions; and also the separate analysis of peculiar and newly-emerged words from Medieval Latin. Explanations in entries are given in Latin and Czech, Latin explanations having the character of a definition, the Czech ones being basically translations.

Volumes published so far: volume I (A–C), volume II (D–H), volume III (I–M). The whole extent of the Dictionary, including the revised, updated text of A–H, is included in the electronic version; a substantial part of the card file index (A–Con, Pi–Z) is also online. The unpublished material is accessible on demand in the Centre.

The fascicules printed so far are sold by the Library of the Centre for Classical Studies: knihovna@ics.cas.cz

While the history of weather and climate in the Czech Lands is attracting a lot of scientific interest, the evolution of meteorological theories and terminology in this region has been studied rather marginally, and solely from the perspective of atmospheric sciences. This project embodies an innovative synergy of humanities and natural sciences, specifically of historiography, linguistics and meteorology. It aims at complex monitoring of the Middle Ages and Modern Times (until 1750) in the Czech lands in terms of occurrence and development of theories discussing the causes of meteorological phenomena and their forecasting. The research is based on an analysis of written, mostly Latin sources from the Czech lands. Particular attention is paid to Latin terms, often derived from Greek, which became the etymological base for many Czech meteorological terms. Studying of terminology development in relation to then meteorological theories allows i. a. the augmentation of Czech online lexicon of meteorology, in terms of etymological and historical development of modern terminology.

FONTES LATINI BOHEMORUM
Published by the publishing house OIKOYMENH under the direction of Hana Šedinová and Zuzana Silagiová, formerly of Hana Šedinová and Lenka Karfíková.
This book series comprises bilingual editions of medieval and humanistic texts of Czech provenance which have not been published before. The texts are provided with rich commentaries and indices and preceded by introductory studies in Czech and in a foreign language. In this way, a strictly scholarly presentation is coupled with a popularising one: the specialised public is given an authentic, reliable text allowing further research, while members of the general public may read (apart from the Czech translation) an erudite introduction to the relevant topic and factual comments on the text. The department’s staff takes part on the book series as authors and editors. The list of volumes published so far is accessible here.

LIBRARY OF MEDIEVAL TRADITION
Published by the publishing house OIKOYMENH, until 2016 under the direction of Lenka Karfíková and Hana Šedinová, from 2021 of Barbora Kocánová, Tomáš Nejeschleba, and Václav Němec.
This book series intends to provide Czech readers with important works of medieval thinking in a bilingual form. Its aim thus is to make accessible the less well known aspects of European culture. The texts are accompanied with introductory studies and rich commentaries. Apart from a large-scale project of publishing Isidore of Seville’s encyclopaedia Etymologiae, writings of important schools of “the 12th century renaissance” and other important texts of the Middle Ages (Bonaventura, Suger of Saint-Denis, Thomas of Cantimpré, Bernard of Clairvaux) are being published. The department’s staff takes part on the book series as authors and editors. The list of volumes published so far is accessible here.

A grant of the Ministry of Education, Youth and Sports of the Czech Republic LD13043: The Dictionary of Medieval Latin – Latinitatis medii aevi lexicon Bohemorum, 2013–2015. The project was a part of the international programme COST “Europa mediaevalis” (principal investigator PhDr. Zuzana Silagiová). Output: Electronic version of the Dictionary, volumes I and II (A–H).

THE CENTRE OF EXCELLENCE “HISTORY AD INTERPRETAION OF THE BIBLE”: A joint project of the Evangelic Theological Faculty of Charles University, Prague, Sts Cyril and Methodius Faculty of Theology of Palacký University, Olomouc, and the Institute of Philosophy of the Czech Academy of Sciences. Principal researcher: Dr. Jan Dušek. Representatives of the department were Hana Šedinová, Barbora Kocánová and Zuzana Silagiová.

THE CENTRE OF EXCELLENCE “CULTURAL CODES AND THEIR TRANSFORMATIONS IN THE HUSSITE PERIOD”: A joint project of the Institute of Philosophy of the CAS, Catholic Theological Faculty of Charles University, Prague, and the Institute of the Czech Language of the CAS. Principal researcher: Prof. Dr. František Šmahel, DrSc. The representative of the department was Zuzana Silagiová. 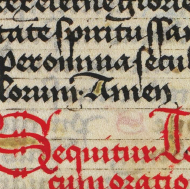