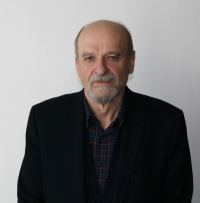 He made a study of the history of modern Czech Classical philology and the social function of humanist instruction. He has published books articles dealing with the reception and tradition of Antique civilization in the Czech and European culture. He has also devoted himself to translations of Neo-Latin literature, especially of Czech origin.

His actual research concerns the problems of Neo-Latin literature in Bohemia and Moravia in the early modern period, primarily the Baroque historiography and hagiography, some literary types (drama, elogia) and rhetoric, history of learning, as well as the relations between Latin and Czech literature in Bohemia.

1979 - gained a doctoral degree at the Charles University

1991 gained a scientific degree CSc. Thesis "The Constituation of Modern Czech Classical Philology at the Prague University (The Activities of Jan Kvíčala and Josef  Král)".

Since 2004 - employed as senior scholar in the Center for Classical Studies of the Institute of Philosophy, Academy of Sciences of the Czech Republic

2001 - vice-director of the Institute for Classical Studies